You are here: Home / Articles And Reports / Jennet is the face of creative Turkmenistan – Part 2

The Dinner at Hugh’s place was meant to introduce the delegation that represented Turkmenistan at the Creative Central Asia forum in Tashkent to the media.

Jennet was the centre of attention. Among the delegation members who were all young, she was perhaps the youngest.

He said that the Turkmen delegation left a memorable impression at the Creative Central Asia forum, which was held in Tashkent, 22-23 November 2019.

It was planned and organized by the British Council Kazakhstan in collaboration with Art and Culture Development Foundation under the Ministry of Culture of the Republic of Uzbekistan.

Hugh was confident that the creative potential in Turkmenistan was at the same level, perhaps even better than the other countries in Central Asia.

According to the website medium.com, the cultural and creative industries (CCI) are one of the most rapidly growing economic sectors globally, accounting for USD 2.250 trillion dollars of revenue annually.

The Great Britain is one of the pioneers and world leaders in creative industries.

Here are some infrgraphics from https://www.thecreativeindustries.co.uk/ to underline the point: 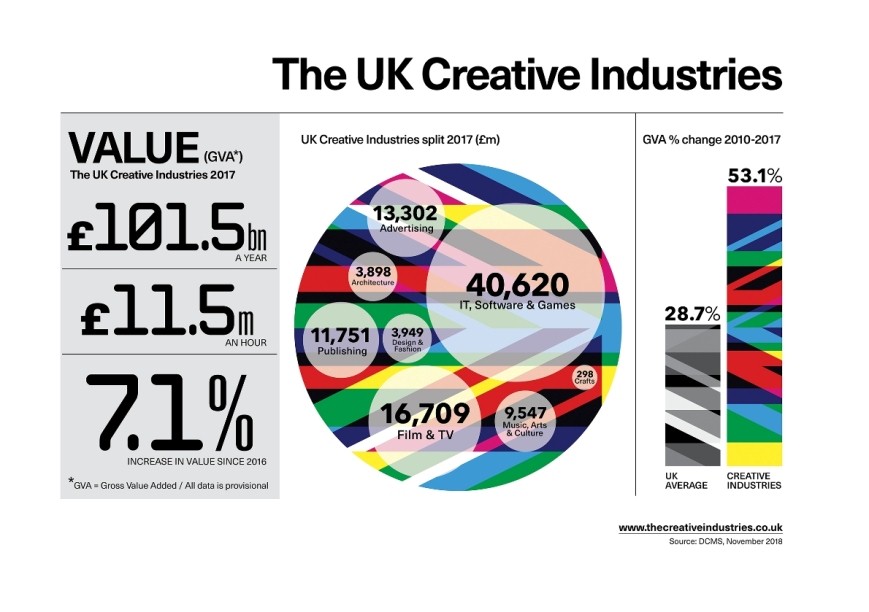 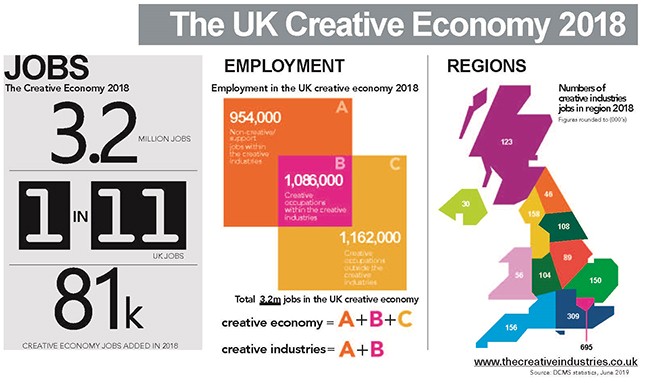 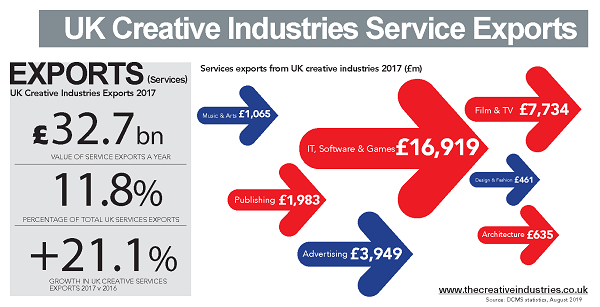 Even though the creative industries have been treated as a separate group so far, the time has arrived to merge them with the overall concept of creative economy.

Here is what UNCTAD has to say on the subject:

What is the creative economy?

The creative economy has no single definition. It is an evolving concept which builds on the interplay between human creativity and ideas and intellectual property, knowledge and technology. Essentially it is the knowledge-based economic activities upon which the ‘creative industries’ are based.

For more information on this, please see: https://unctad.org/en/Pages/DITC/CreativeEconomy/Creative-Economy-Programme.aspx?Ne=21,10,,&Me=11,4,,

Also, while you are visiting the UNCTAD website, please look at their Creative Economy Network: https://unctad.org/en/Pages/DITC/CreativeEconomy/Networking-and-Synergies.aspx

Even though the idea of creative industries has almost merged with the concept of creative economy, there is another merger ahead.

When the IoT (Internet of Things) and IoS (Internet of Skills) become a norm rather than a novelty, the creative economy will be the mainstream economy. 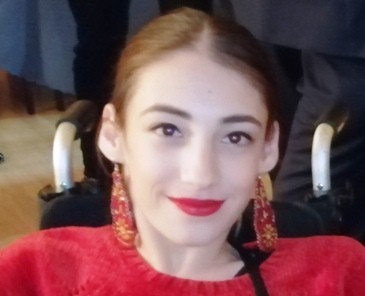 Because Jennet is our icon for Creative Turkmenistan, let’s imagine a couple of possibilities in the not-too-far future.

For instance, if someone can develop an app that mimics the hand-eye coordination and dexterity of Jennet, it can be used on a 3D printer to produce her latest jewelry and accessories. Anyone with a 3D printer would be able to buy the app from the app store and it would be as if Jennet’s shop is everywhere in the world, not just confined to the Turkmenabat city. Jennet will go global.

Another example – if another app is developed, capturing the hand-eye coordination and dexterity of Jennet, without going through every step for the creation of a jewelry piece, it would be a goldmine for the people who have the imagination but lack the necessary hand-eye coordination and dexterity to create anything and everything that requires precision and patience. For a reasonable price from the app store, the skills of Jennet would be available to anyone.

Sky is not the limit because, actually, there is no sky.

Here are short profiles of the members of the delegation of Turkmenistan that participated in the Creative Central Asia Forum in Tashkent (from the website of British Council Kazakhstan): 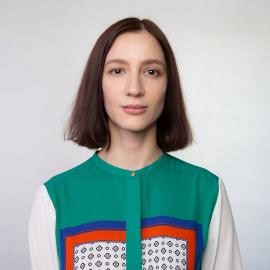 Alexandra is an independent designer with over 15 years of experience in brand identity, illustration and game design. She works with a wide range of clients from around the world. Previously Alexandra worked in local and international studios, and have done projects for Coca-Cola, Samsung, BMW and Mercedes. She delivered projects on climate change and other environmental problems for UNDP in Turkmenistan. In 2011 she joined the Picnic Hippo game studio as an art director and participated in the development of mobile games as part of an international team. Since 2016 she started working as a freelance designer, and later founded a logo service helping other designers to sell their works. In 2018 Alexandra started Hi Ashgabat, an entertainment project about the life and culture in Turkmenistan in the past and present. 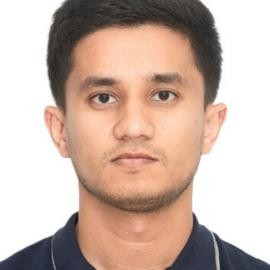 Dayanch received several art certificates from schools in the UK. When he returned to Turkmenistan, he started his career as a graphic designer. In 2014, he co-founded Belli Creative Studio, and since has taken the position of art director. With his supervision, the firm has designed the brand identities of the international events as Ashgabat 2017, Ashgabat 2018 IWF World Championships and First Caspian Economic Forum 2019. 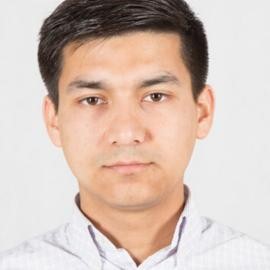 Dovlet is an ambitious businessman. He earned his bachelor’s degree in the UK, where he studied Computer Science and Finance. In 2014, he co-founded Belli Creative Studio, and since he holds the firm’s directorship. Under his directorship, the studio has managed brandings of considerable projects like Ashgabat 2017, Ashgabat 2018 IWF World Championships and First Caspian Economic Forum 2019. 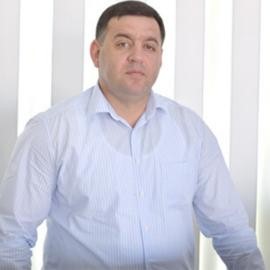 In 2003 Farruh graduated Higher bank school of Ashgabat city and has more than 9 years of work experience in IT-business sphere. In 2010 г. accedes to the capacity of general director of «Turkmen-Tranzit» company and is charged with strategic management of organization development and market extension. Company is system integrator in information technologies field. Under the direction of Farruh «Turkmen-Tranzit» reaches leadership in IT-market in Turkmenistan. During the years of organization management he acquired and developed skills in selling fields of technologically hard decisions, projects management, development of foremost decisions of information security ensuring. 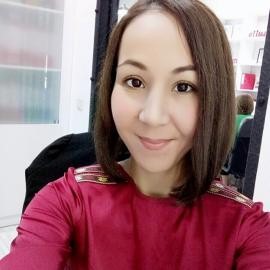 Jamilia Kerimova graduated from the Belarusian State Academy of Agriculture in 2013. In 2013-2014, she was an assistant to a private entrepreneur. Since 2015, Jamilia has headed Turkmen-Tranzit’s Legal Department. She’s a professional, diligent and proactive employee valued by the company’s personnel and management. Jamilia prepares corporate regulations and effectively manages legal work. She knows how to deal with difficult situations in line with laws and corporate interests and how to make correct legal decisions in time. She’s good at communication and processing of legal information. Jamilia works continuously to improve her professional knowledge. She’s currently developing a co-working space, which is a new area of expertise for the country. 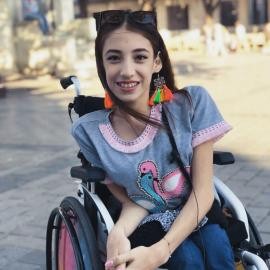 I am ardent about handcrafting work and embroidery from my childhood life but last several years I focus more on handmade jewellery in Turkmen style. I have a little shop in Turkmenabat city, where I demonstrate my collection of jewellery. Also, two-three times a year I attend in exhibitions of handmade items in Ashgabat, Turkmenistan, representing my works and meeting new people from different places of Turkmenistan. Last year I was invited to take part in Christmas Exhibition of Handcrafts organized by United Nations (UN) and British Embassy in Turkmenistan. It was a unique opportunity for me to present my works and meet new people as well as develop my knowledge on new types of crafting. I am planning to organize professional workshops in different regions of the country in order to help handicraft masters to produce the highest calibre work. 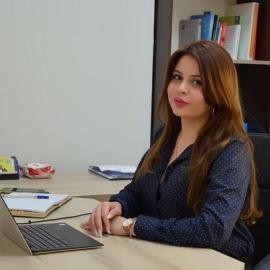 Mahri is the CEO of local Turkmen company established in 2016. Graduated from Russian state academy of intellectual property, qualified Lawyer and until 2018 she has been working for different local IT and services companies. Since April of 2018 company launched totally new for the area project – Startup accelerator. The project is to support young, ambitious, full of ideas entrepreneurs in making their ideas come true. Later in this year company won a grant from British Embassy to develop the project.  Mahri hopes she could possibly widen her horizon, will have an opportunity to exchange experiences with other participants and bring some new ideas to her company during the forum.  https://www.akyllytilsimat.com/ 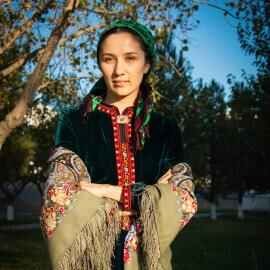 Selbi Jumayeva is a cultural sociologist who explores Central Asian human geography and intellectual traditions through visual ethnography, archives, folk art representations and bazar ecologies. She has taught environmental philosophy, social theory and research methods in Turkmenistan and Kyrgyzstan. Selbi was an International Gender Studies Center WEF Fellow at Oxford University in 2016 and obtained her MA degree with honors from Essex University as Chevening alumna in 2011.  http://instagram.com/s.jumayewa 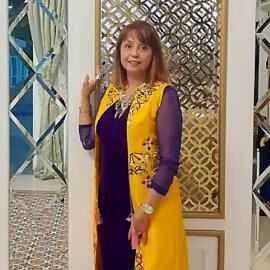 Sheker is a member of the Union of Architects of Turkmenistan. Founder and head designer of the interior design studio Design by Sheker “Design of your dreams”. Entrepreneur who engaged with Turkmen embroidery and all kinds of products related to it: clothing, decor, jewellery, household items, paintings, tapestries and others that are handmade by Turkmen women. Sheker not only promotes those Turkmen handcrafted embroidery items but also creates all kind of wearable jewellery and accessories from them for international display. Sheker also is a lecturer at The Union of Industrialists and Entrepreneurs of Turkmenistan “Business School”, her teaching course is “Design work and interior design”. Other interests: photography, painting, fashion design.  https://www.instagram.com/designbysheker/ 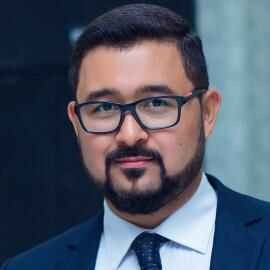 Professional Entrepreneur with a Bachelor of Applied Science (B.A.Sc.) focused in Accounting and Business Management from Northern Illinois University, DeKalb, Illinois, USA with excellent communication skills in English, Russian, Turkish and Turkmen languages. He is proficient in customer service, sales, and strategic business planning. Currently he is the Financial Director and a Co-founder of Caspy Creative Studio – a design studio based in Ashgabat, Turkmenistan. Caspy Creative Studio is one of the most successful creative agencies of the country in this industry. This studio has provided unique and proven results for their clients in various fields within and outside of the country. Tahyr is highly motivated and moving forward in the field of creativity as their slogan states “TURNING IDEAS INTO REALITY”.   http://www.caspy.biz/