You are here: Home / Articles And Reports / Energy diplomacy of Turkmenistan discussed at OGT 2019 with focus on TAPI – Part 2

As mentioned in the first part of this report, the CEO of the TAPI Pipeline Company Limited, Muhammetmurat Amanov, the principle finance specialist of ADB, Roland Pladet, and the senior geologist at GCA, Thomas Hancock provided useful information about TAPI and the gas potential of Turkmenistan.

Amanov assured that there would be zero physical displacement along the route of TAPI. He was of the view that the local communicate were, in a way, partners in the project.

He said that the land agreements for the placement of TAPI were likely to be ready by the first quarter of 2020, with full respect for the land rights ethics.

He mentioned that support from the Wood Group and Bilfinger Tebodin companies to improve the construction and engineering work of the gas pipeline was appreciable.

The completion of the security assessment protocol of Pakistan and Afghanistan was expected before the end of this year.

The pipes for the projects would be received through the Turkmenbashy Internaitonal Port and the logistics service contracts would be finalized by the end of first half of 2020, he said. [This summary of speech of Amanov is based on a report carried by Business Turkmenistan]

The principle finance specialist of ADB, Roland Pladet gave a power point presentation on contribution of ADB in TAPI and some related aspects of energy sphere in the region.

Here are the pictures of his slides. Sorry for the poor quality because the phone camera doesn’t capture good images from the screen: 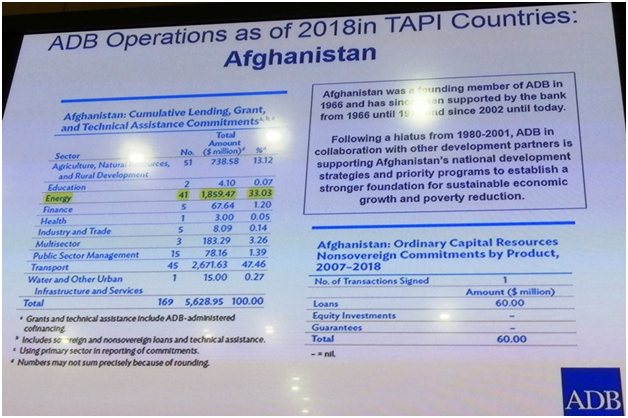 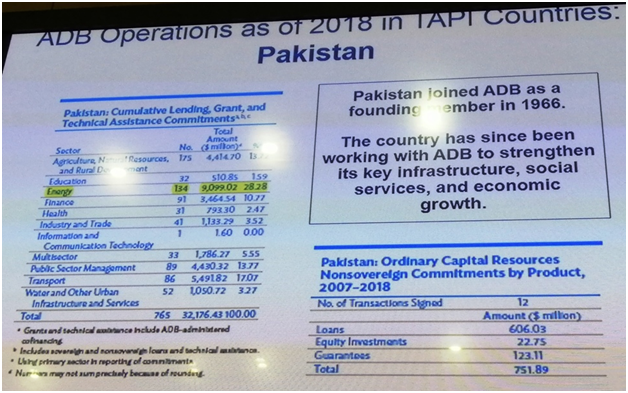 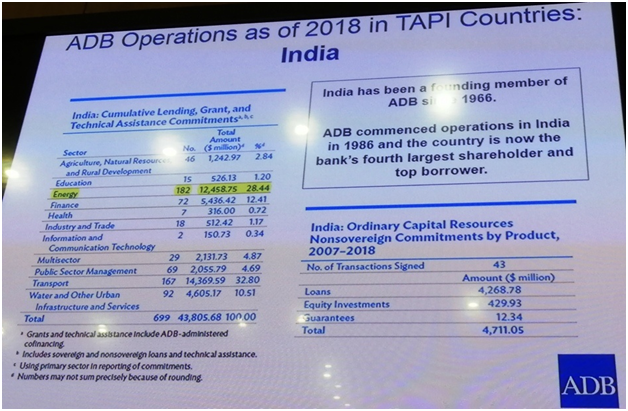 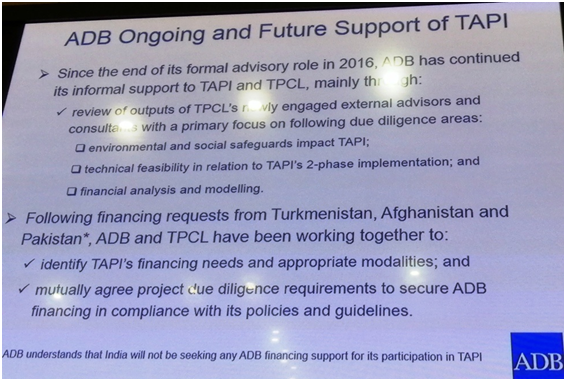 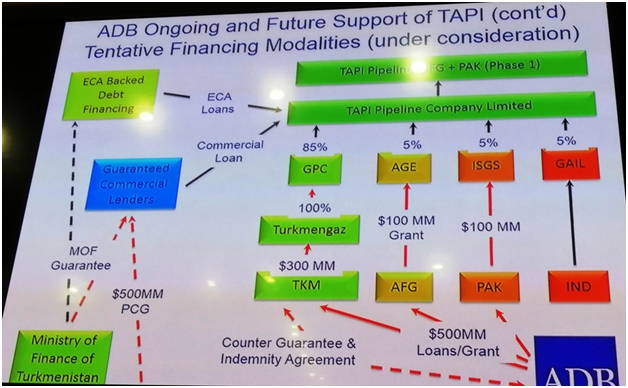 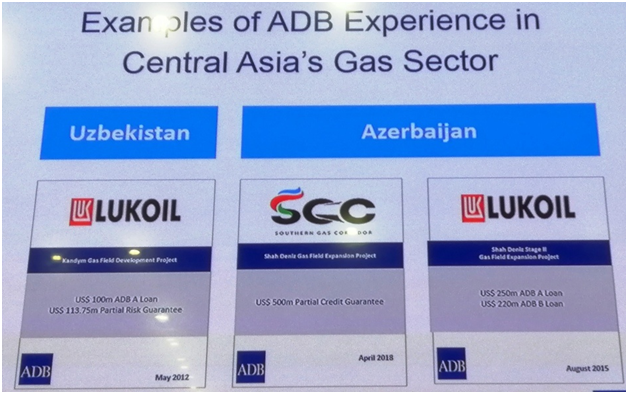 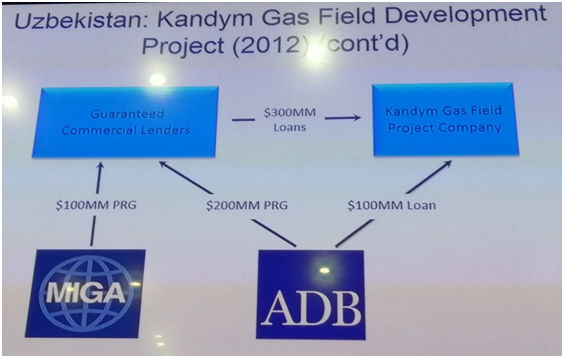 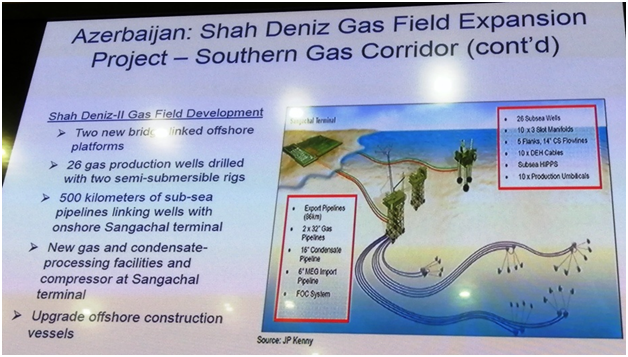 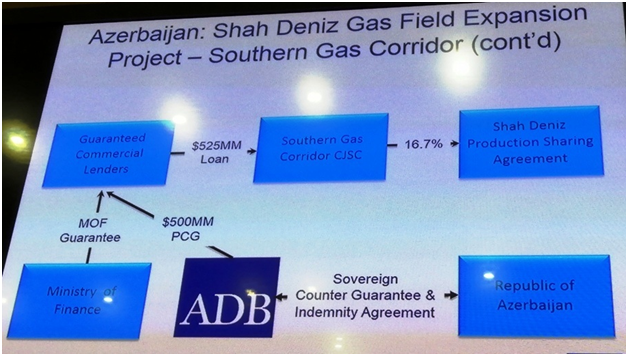 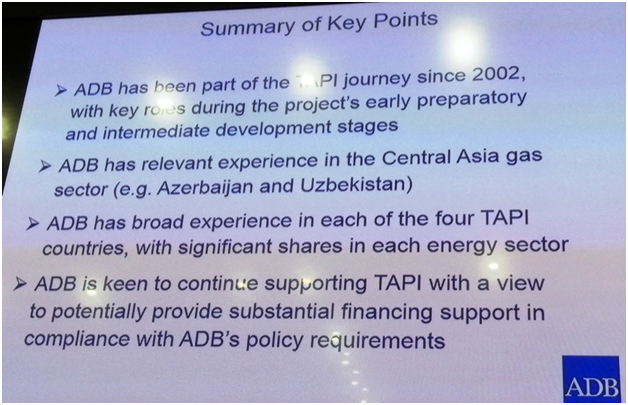 The senior geologist at GCA, Thomas Hancock, gave a presentation on the ongoing assessment work on Galkynysh and the adjoining gas fields of Turkmenistan.

The slides in his presentation could be subject to certain permissions therefore we are producing here just two of the slides, which have the information that is available already from other sources. It should be noted that the best case scenario for the gas in place in Galkynysh has gradually increased from 6 tcm (trillion cubic meters) in 2008 to 17.6 tcm in 2015. This is likely to increase further as the current phase of study is still in progress.

Also noteworthy is that fact that of the 17 largest gas fields in the world, only three are onshore and all of them are located in Turkmenistan – Galkynysh, Yashlar, and Daulatabat.

The gas is there. The political will is there. The awareness that gas is not just the cleanest burning fuel, it is also the means to lift the countries and communities from poverty toward sustainable prosperity, is also there.

It is a mix of hard and soft infrastructure. It is the ambition based on emerging realities. These are the realities that we have the power to shape.

Just as I call Ms. Elana Panova by her first name, Elena, I would like to call Chang-Ching Yu, the country director of ADB in Turkmenistan as Yu Bey.

When I single out the likes of Elena and Yu Bey, it is not to under-appreciate the contribution of everyone else. Why they stand out is because of their willingness to go the extra mile, their determination to stay sharply focused on the goals, and their ability to ignore the distractions.

As I mentioned in the first part of this series, the diplomats and the officers of the international organizations such as the UN are assigned a limited tenure in a country, after which they must move on.

They don’t have the luxury to move at their own pace. They must understand the rules of the game quickly and perform within the perimeters that are not in their power to change.

When they go the extra mile, they don’t get any additional salary or bonus. When they perform just at their baseline mandate, they are not penalized. One of the few benefits they may expects for their exceptional performance is the promotion to a higher position or a better position in some other organization.

But I am sure this is not the reason they work hard to deliver more. It is just the way they are, and this is the reason to praise them frequently.

In more than 28 years of independence, the Central Asia region has learned that better terms can be obtained when the international organizations play a dynamic role in the development initiatives.

The region needs to own these dedicated and competent people. Truly, it is there already in terms of the acknowledgement of their contribution in the overall development progress in each country but there needs to be more of that. Perhaps a good way can be to regularly publish the online and print booklets, describing the achievements of each diplomat and officer of the international organizations who made noticeable effort to propel the development agenda during the past year. These booklets should be recommended to the high school and university students as supplementary reading.

Life is short and we can sometimes get tired. Occasionally, we just need the acknowledgement of our hard work and contribution. Just a sincere word of appreciation can do so much.