The embassy of Germany in Ashgabat hosted on Thursday a reception to mark the German Unity Day.

Here is the speech of Ambassador Neithart Hofer-Wissing at the reception:

Today, 29 years ago both German states following decisions by their freely elected parliaments united themselves peacefully and with the consent of the whole international community.

Less than a year prior to that, on 9 November 1989 the fall of the Berlin Wall had marked the end of the world’s division in East and West and of the Cold War.

At that time the whole world took a deep breath and was under the impression that progress of humanity and the solution of problems threatening all of us would no longer be hindered by political obstacles.

Nowadays, we all know better: Our hope has not yet become true that respect of the rule of law in international relations would enable the solution of conflicts.

Populists are fostering resentments and know no other goals than the satisfaction of their own ambitions and they are shaking even such countries which we used to admire for their democratic integrity.

Even worse, they ignore the rules based international order and rely on the right of the strongest. Such people exist not only in big countries; some are striving “only” for regional hegemony.

Next year, as we shall commemorate the 75th anniversary of the end of the Second World War we should reflect carefully on the advantages of the international order that has been created at that time. And be sure: the Fridays for Future will remind us of the real challenges!

Unfortunately, populists exist in my home country as well. They wish to exploit frustrations grown in some of us after the Wall’s fall. But even if we have to acknowledge in retrospect that after the end of “real socialism” not everything developed as it should have: all of us are better off than thirty years ago.

There was no revenge for the injustices and crimes of the GDR but they have been dealt with those means at the disposal of a state of law. Unprecedented solidarity and considerable support by our European friends have made it possible to overcome most of the failures of the catastrophic state economy of the GDR.

Nevertheless, some people pretend that democrats are guilty of the systemic failure although they are just the “plumbers”.

Regardless of the crisis of confidence between the people and the “elites” which we observe in so many countries, and not only in democratic ones – the words of a former US President are still true:

The unification of Germany was also an important step on the way towards unifying Europe which has since seen several enlargements and is continuing.

The fundamental principles of the European Union have made possible enormous progress for all member states even if there are problems now and then.

It is not a proof to the contrary if now one member state wishes to leave the Union.

Anyway the Brexit will bring severe problems for all of us and we will have to use all our efforts in order to overcome its consequences.

There is a close connection between today’s Day of German Unity and Turkmenistan’s Day of Independence which we have celebrated intensively last week.

Both became possible only by the end of tyranny in the Soviet Union and Eastern Europe. Ever since Turkmenistan became independent, relations among our both countries have developed intensively in all areas.

Last November, Deputy Prime Minister and Minister for Foreign affairs Meredov visited Berlin and Hamburg and, besides having talks with his German counterpart delivered a keynote address to the Eastern Committee of the German industry.

In May, we had bilateral political consultations with Deputy Foreign Minister Hajiev here in Ashgabat.  Just the other day the German-Turkmen Forum held its annual session in Berlin.

The improved cooperation between the Central Asian countries is an important step forward.

Germany supports these endeavors that are to strengthen the region as a whole as well as the independence of each of its countries.

Turkmenistan is included in multilateral programs of the GIZ; just a few days ago we achieved the Turkmen Government’s consent for this year’s projects.

At the beginning of 2020, it is envisaged that the German Foreign minister will invite his colleagues from Central Asia in order to launch the continuation of the “Berlin process” that was established by Federal President Frank Walter Steinmeier during his tenure as Foreign minister more than a decade ago.

We do hope on active participation of all states of the region.

I am very glad that we have now agreed on a date for the next meeting of our Joint Working Group on Trade an Economy which will be convened in Ashgabat in January.

It will also have to deal with a much better exploitation of the great potential of our economic relations, given that the present volume of some 150 Million euro is far below the level of 2014.

I am sure that continued economic reforms as well as support for the private sector and foreign direct investments will contribute to sustainable improvement.

In 2018 and 2019, the exhibition about the Bronze Age Kingdom of Margiana was shown in Berlin, Hamburg and Mannheim and has attracted a lot of attention – more than 400.000 visitors are witness thereof.

The exhibition serves as an example of the great potential of joint efforts in the field of cultural relations.

We do hope that some uncertainties on the recognition of foreign university degrees will be clarified soonest in order for the students exchange to be continued.

A particular pleasure for us is the opening of our “Bauhaus” exhibition in the Museum of Fine Arts next Tuesday, 8 October. As you might have already seen whilst entering this hall, Turkmen students were took an intensive interest it the preparations, and I do hope that at the opening I can welcome as many of you as possible.

Some three weeks ago I have taken up my duties as the new German ambassador in Ashgabat.

I am very happy about this new assignment and look forward to contributing to the relationship between Germany and Turkmenistan.

I should like to thank you for the warm welcome during these last days, and also to my colleagues at the Embassy for their reception and their engagement in the preparations of this evening.

Today’s reception is supported by some sponsors of which I should like to mention here ILF, Deutsche Bank, Inros Lackner, and Gesscon.

Before passing the floor to our guest of honor, Minister Amanepessov I should like to inform you that we are counting on your support in bringing down another Berlin Wall – and we do hope that you like the taste.

May the spirit of Freedom for which thirty years ago so many courageous women and men fought for maintain its strength and contribute to the further development of international relations!

May the German –Turkmen relations continue to grow for the well-being of all of us and continue to contribute to the flourishing of Turkmenistan! 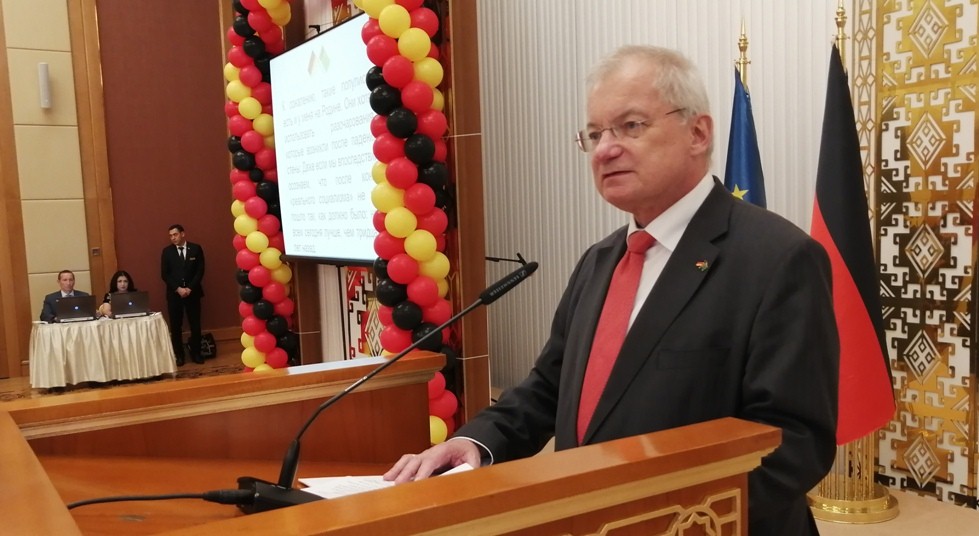 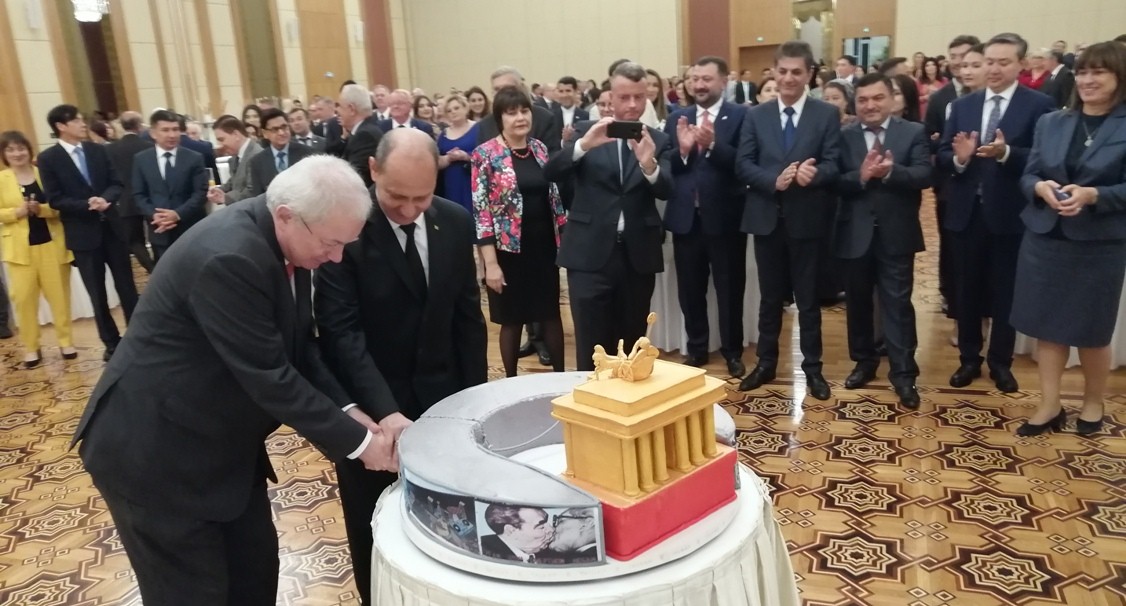 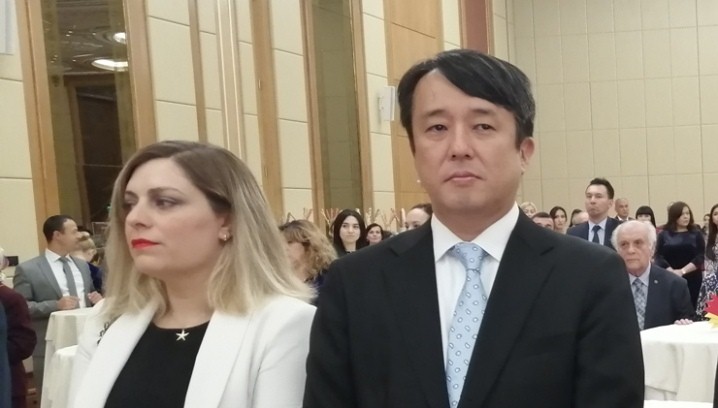 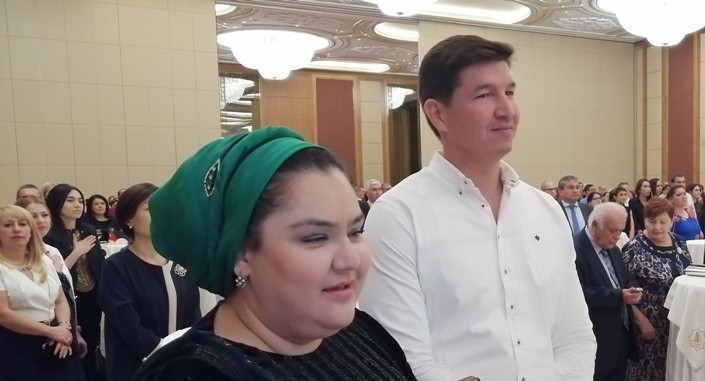 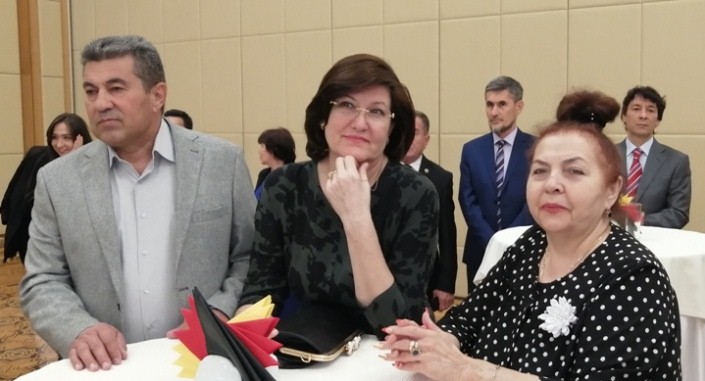 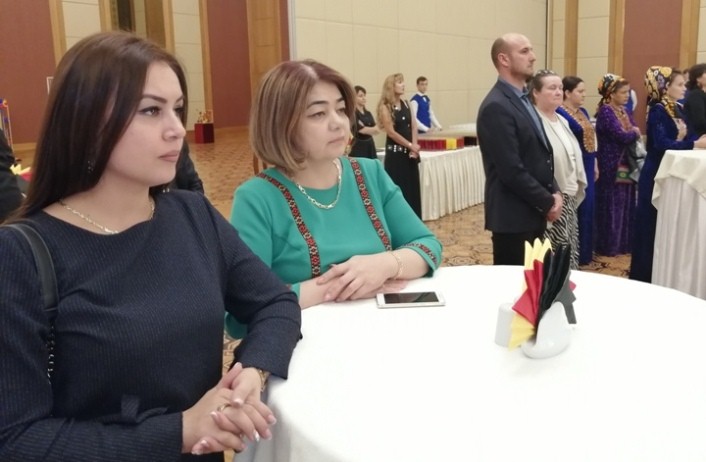