In a day tightly packed with high level, result-oriented meetings, the sides signed the finalized version of the host country agreement for TAPI, agreed to form a joint working group for the annual export of 1000 megawatt of electricity from Turkmenistan to Pakistan, started the formation of a joint business council through their chambers of commerce, and the creation of a new corridor connecting the seaports of Pakistan with the Turkmenbashy Port of Turkmenistan through the territory of Afghanistan.

The Turkmen delegation had meetings with a number of top officials of Pakistan:

The following documents were signed:

Dr. Arif Alvi, the president of Pakistan, said that Pakistan could offer Turkmenistan the shortest route to the open sea through Gwadar seaport and its national road and railways networks.

President Alvi emphasised that Pakistan is a peace-loving country, desirous of good relations with all its neighbours.

He underscored that Pakistan is ready to enter into dialogue with India on all matters of mutual interest and work towards de-escalation of tensions in South Asia.

He further stated that Pakistan would like all friendly countries to urge India to work with Pakistan for the amicable resolution of Kashmir dispute in accordance with UNSC resolutions.

The sides agreed that it was in the best interest of all to go for the early implementation of Turkmenistan-Afghanistan-Pakistan-India (TAPI) Gas Pipeline project.

Alvi said that Pakistan was planning to hold the ground-breaking ceremony of TAPI Gas Pipeline Project on its soil on a mutually agreed date.

He also welcomed Turkmenistan’s offer for export of 1000MW electricity to Pakistan and signing of the Intergovernmental Agreement between Pakistan, Afghanistan and Turkmenistan.

The president pointed out that existing trade volume was not reflective of the potential and cordial ties between the two countries, and underlined that there was the need to further enhance bilateral trade and economic relations.

He highlighted that joint ventures in various sectors like agriculture, construction, petrochemicals and information technology need to be explored.

The president further emphasised the need for early finalisation of the MoU between Gwadar and Turkmenbashi on Sister Port Relationship.

Expressing his satisfaction over existing bilateral relations, PM Imran Khan emphasized on endeavors for enhanced trade and economic relations between Pakistan and Turkmenistan.

According to a statement released from the ministry, the prime minister warmly received the Turkmenistan’s foreign minister and his delegation and welcomed them to Pakistan.

Meredov conveyed the sincere prayers and good wishes of his leadership for peace, prosperity and goodwill of Pakistan, its government and people.

PM Imran reciprocated with his message of sincere prayers and best wishes for Turkmen President Gurbanguly Berdimuhammedov and his people. The Turkmen Foreign Minister briefed the Prime Minister about the existing fraternal relations between Pakistan and Turkmenistan that are marked by mutual trust and understanding.

He also highlighted the importance of gas and power connectivity projects, between both countries, which are being negotiated between the two countries and require early implementation.

The Turkmen Minister for Energy, Mr. Charymyrat Purchekov and Ambassador to Turkmenistan to Pakistan were also present during the meeting.

The second round of Pakistan-Turkmenistan Bilateral Political Consultations (BPC) was held at the Ministry of Foreign Affairs in Islamabad on Tuesday, the Dispatch News Desk (DND) news agency reported.

The Foreign Minister Shah Mahmood Qureshi and the Deputy Chairman of Cabinet of Ministers and Minister of Foreign Affairs of Turkmenistan Rashid Meredov led their respective delegations to the talks. 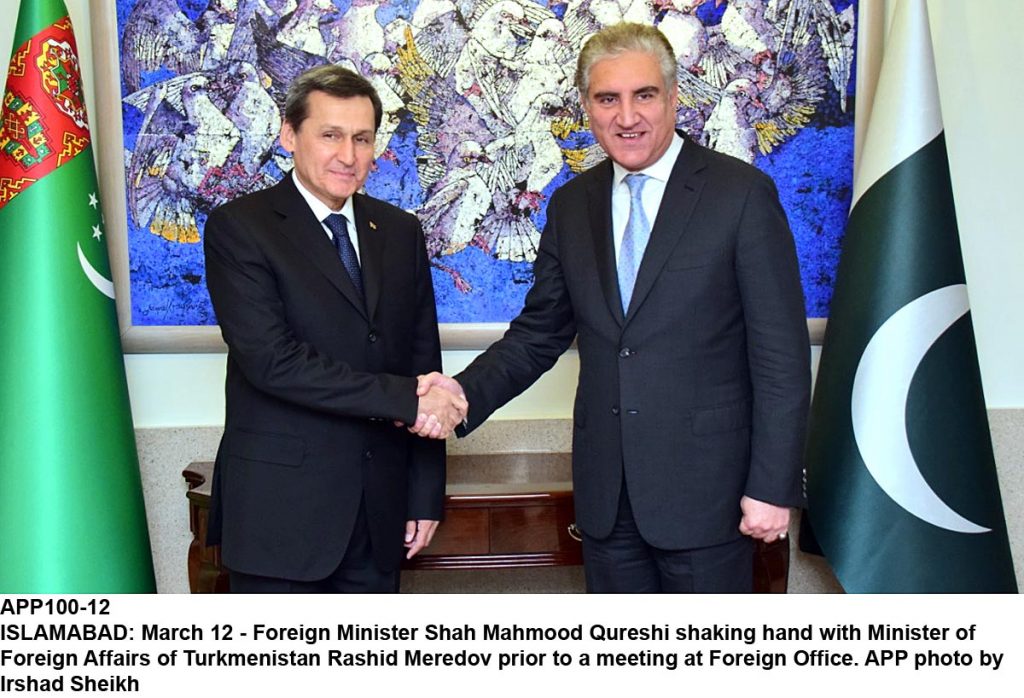 During the talks, the two sides reviewed the implementation of bilateral decisions undertaken in the first round of Pakistan-Turkmenistan Bilateral Political Consultations.

The two sides hailed the progress in political, diplomatic, economic, commercial and defense sectors between Pakistan and Turkmenistan. 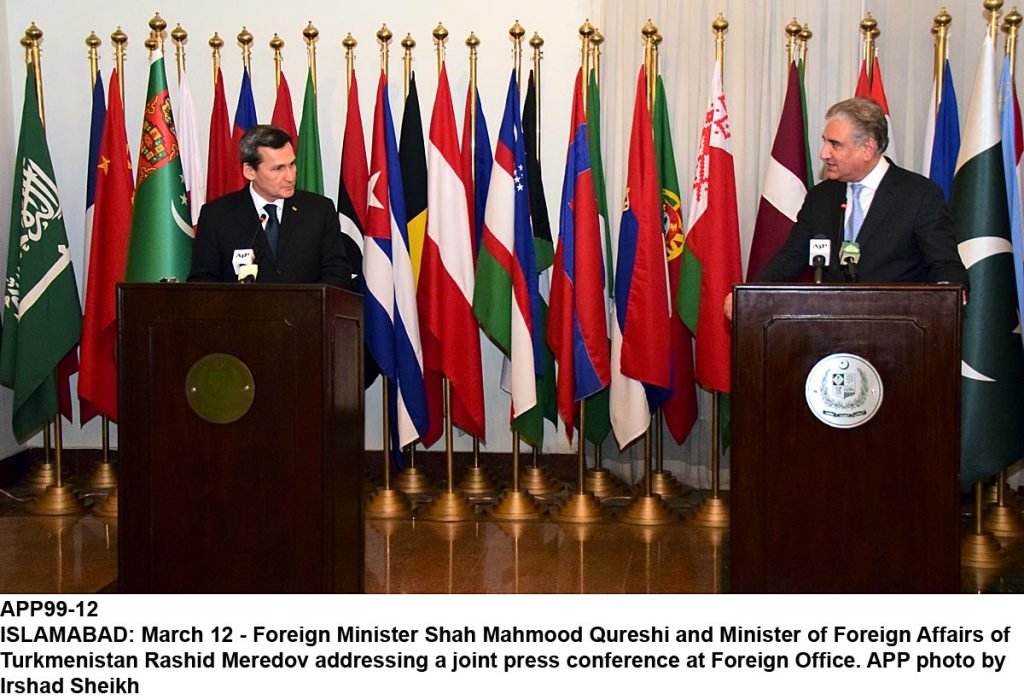 They also deliberated upon other aspects of bilateral cooperation between the two Countries.

Meeting with minister of oil and gas, Ghulam Sarwar Khan

The minister for Petroleum Ghulam Sarwar Khan reiterated Pakistan’s commitment for an early and successful implementation of the TAPI project.

He hoped the ground breaking of the project will be held in Pakistan this year.

Turkmen Foreign Minister R Meredov appraised the Minster of his government’s initiatives in ensuring the timelines of the project.

He welcomed Pakistan’s continued commitment and active interest in the TAPI gas project.

The Turkmen Minister discussed with the Pakistani delegation his Government’s plan to make transport and energy corridor between Pakistan and Turkmenistan via Afghanistan and to lay an optic fiber network parallel to the route of the pipeline and see its possible extension till China. 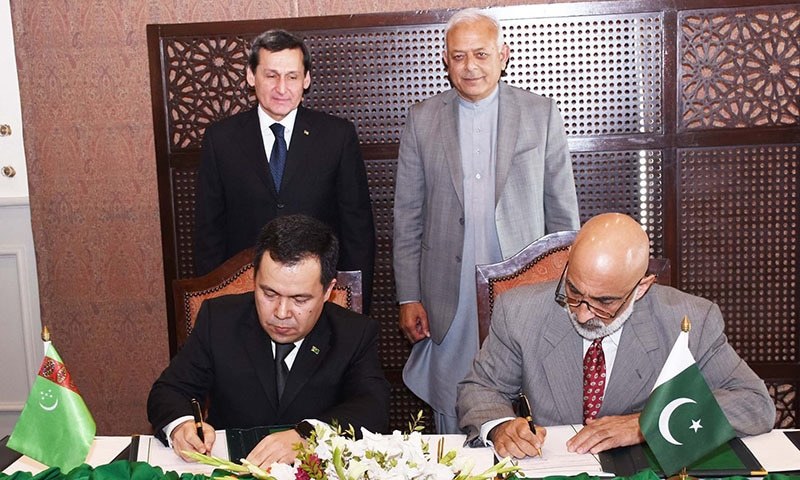 Pakistan and Turkmenistan signed the final version of the Host Government Agreement on TAPI Gas Pipeline network in Islamabad today.

The agreement was signed by the Secretary Petroleum Mian Asad Hayauddin and Chief Executive of TPCL Amanov.

TAPI will be implemented in two phases: the first phase is free flow phase with estimated cost of $5 to 6 bn.  While second phase is installation of compressor stations with the cost of $1.9 to 2 bn. Civil works of the project have already commenced in Afghanistan after the project’s ground breaking (Afghan section) was held last year.

Both, Turkmenistan and Pakistan resolved to hold the steering committee meeting of the project in March 2019.The tenders relating to this project will analyzed in next 2 months. The construction equipment will be procured in May 2019.

Meeting with minister of power and water, Omar Ayub Khan

The sides agreed to establish a joint working group (JWG) to discuss and finalize the negotiations on electricity transmission line from Turkmenistan to Pakistan via Afghanistan.

Omar Ayub said that there was huge potential for trade and development between the two regions. He said that Pakistan’s location offers the shortest and most feasible route through its deep sea ports to the Central Asian region.

The minister stressed that peace and stability must return to Afghanistan which will not only be in the interest of Pakistan but also South and Central Asia. 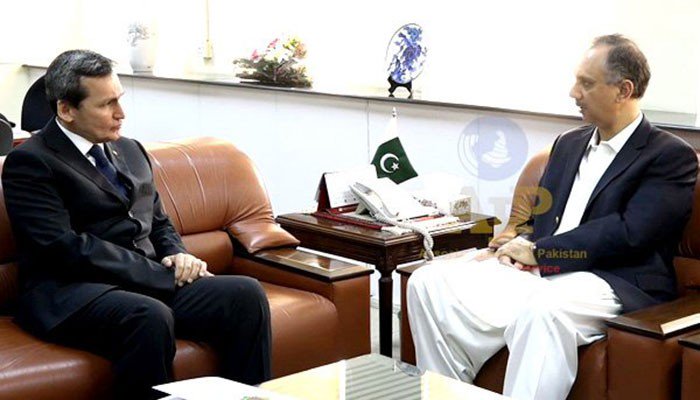 Omar Ayub highlighted that an open and competitive electricity market wass being envisaged in Pakistan which will not only offer exponential investment opportunities to entrepreneurs but also open vistas for regional electricity trade.

He said that grid inter-connectivity among Central Asian States and South Asian countries will also attract other countries especially along the CPEC route.

He said that it was the vision of Prime Minister of Pakistan to develop regional economic integration, which he said was highly essential for the social and economic prosperity of the region.

The minister briefed the delegation about the economic priorities of the government, which he said were geared towards people-centric economic growth and provision of social services to all citizens across the country. He also highlighted the benefits of China-Pakistan Economic Corridor (CPEC), saying that Pakistan would become the hub of economic activities once the project was completed.

He also offered training facilities for the Banks from Turkmenistan. The participants of the meeting also underscored the need for strengthening financial linkages between the two countries as well as enhancing cooperation against money laundering activities. /// nCa / Geo / ARY / Radio Pakistan / Business Recorder, 12-13 March 2019