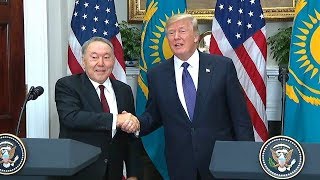 Kazakhstan has always followed a balanced policy that highlights the Central Asian region in a positive light on the world stage. An ongoing tenure and a recently concluded event are the case in point. — President Nazarbayev of Kazakhstan met President Trump of USA on 16 January 2018, and Kazakhstan is the current chair of UN Security Council this month. There is direct connection between the both.

It is important to look at the outcome.

There are several ways to judge the importance given by the White House to a meeting. One convenient way is to count the number of words used in the official reports of the White House.

The outcome statement of the Nazarbayev-Trump meeting, their remarks before the talks and their statements after the meeting cover 3200 words in three separate reports on the website of the White House. This is quite unusual – and impressive.

It is impressive because the USA declared that the meeting was taking place in the framework of an ‘Enhanced Strategic Partnership Dialogue.’ 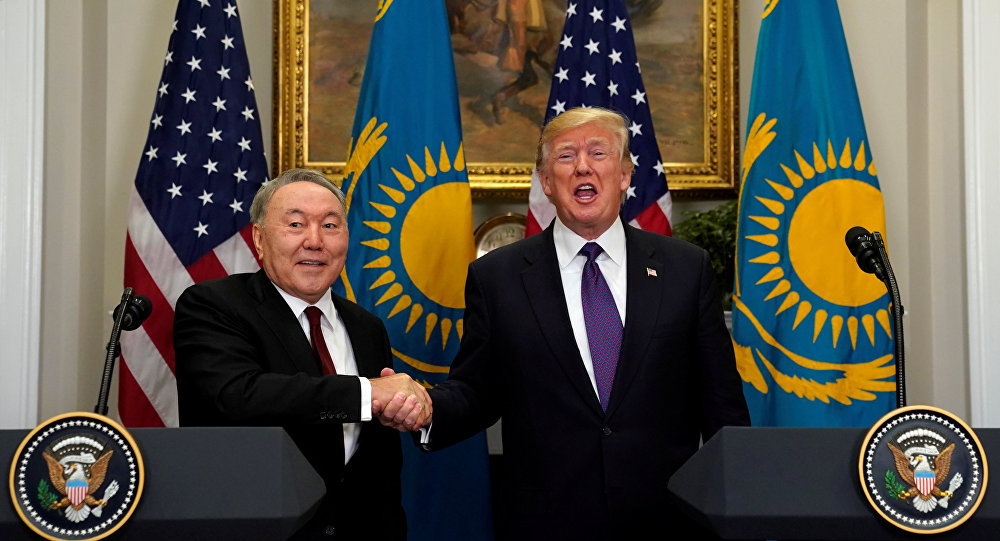 It was also impressive because Nazarbayev said during the press conference that he was representing not just Kazakhstan but the whole of Central Asia. He said, “And today, I’m representing Kazakhstan, the country that used to be a part of Soviet Union, and when the Soviet Union collapsed, this was not the most well-to-do former republic.  But I’m also here representing Central Asia, in the format of five Central Asian countries.”

It was equally noteworthy when Trump acknowledged during the press conference, “I’m pleased that the President has shared his plan for Kazakhstan to become a top 30 global economy by 2030, and he’s on his way — very rapidly.”

Peace and security featured prominently in the talks, with both sides being aware that progress and prosperity can only thrive in the atmosphere of stability and peace.

When we talk of peace and security in Central Asia, we talk of Afghanistan as the core issue. 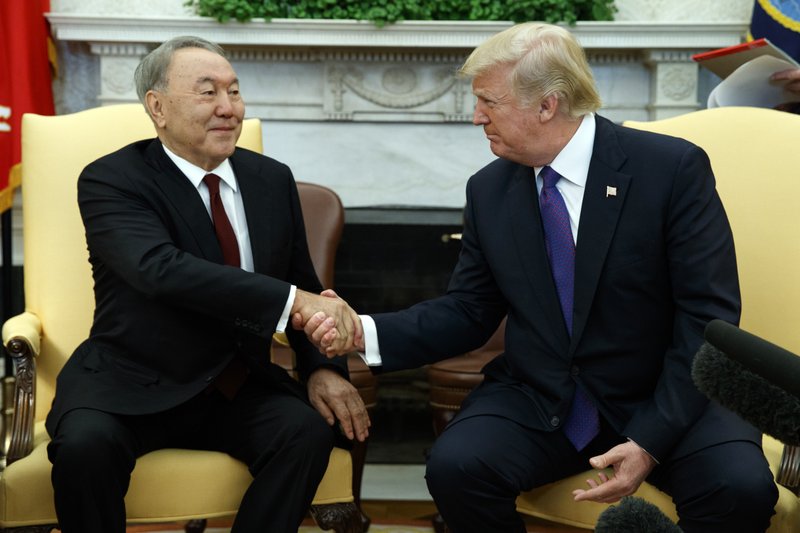 As the Nazarbayev-Trump meeting took place, the situation in Afghanistan remains as uncertain as ever. More than 18000 people were killed in Afghanistan in 2017. This is the highest annual figure since the start of war in 2001. Everyone is worried.

Kazakhstan said that the C5+1 dialogue (Kazakhstan, Turkmenistan, Tajikistan, Uzbekistan, Kyrgyzstan + the United States) welcomes the future Afghan participation in the C5+1 projects. Both sides agreed “to seek a peaceful resolution of the conflict in Afghanistan, and to pursue initiatives fostering greater political and economic cooperation in the region,” the White House outcome statement says.

It adds, “The two leaders recognized that only an Afghan-led and Afghan-owned peace process will bring stability and security to Afghanistan.” 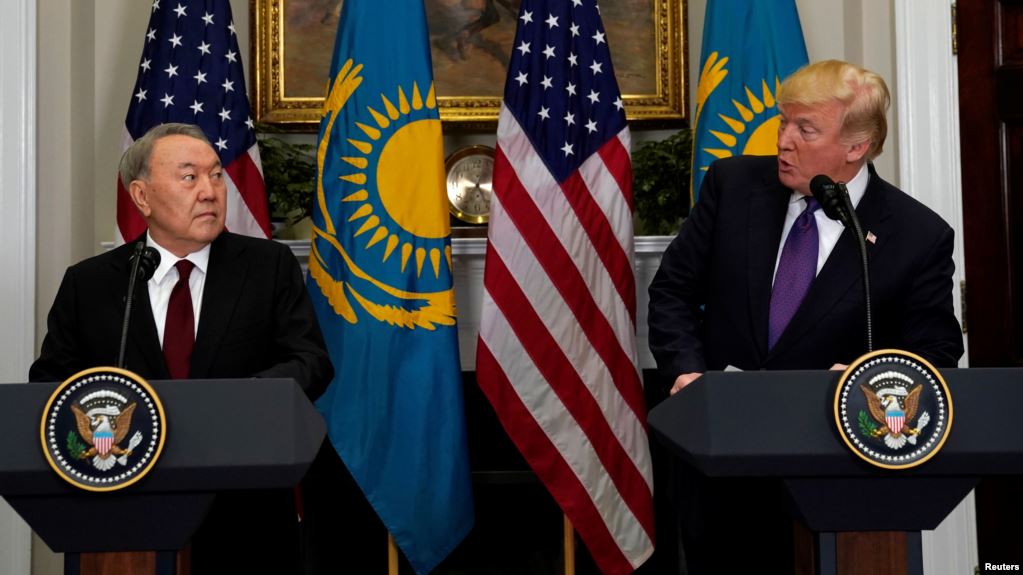 Kazakhstan has already made considerable efforts to facilitate peace in Afghanistan. Nazarbayev said, “Mr. President, so far, we provided some humanitarian and technical support to Afghanistan worth 75 million U.S dollars.  But on top of that, Kazakhstan government spent 50 million U.S. dollars training Afghanis in Kazakhstan to some civilian professions that they cannot get trained in Afghanistan.”

The role of Kazakhstan as an elected member of the UN Security Council for the period 2017-2018 and its chairmanship of the Council for this month also attracted praise from Trump.

In the backdrop of the consistent policies of Kazakhstan, Trump lauded the voluntary renunciation of the nuclear arsenal in 1992, and opening of the International Atomic Energy Agency Low Enriched Uranium Bank in Kazakhstan as great contribution toward decrease in the risk of nuclear enrichment technology proliferation.

Nazarbayev said that having given up the fourth largest nuclear arsenal in the world on our own accord and voluntarily closing down the nuclear test site Semipalatinsk, “Kazakhstan has the moral right to talk to the nations that are seeking nuclear weapons.  And this is the way we’re talking to Iran, and this is the way we will be talking to North Korea.”

He said, “I think the issue of North Korea can be solved by joining efforts of United States, China, and Russia.  And Kazakhstan, being a neighbor of Russia physically, of course, is following very closely the dynamics between the U.S. and Russian relations, which suddenly plunged into the abyss.” 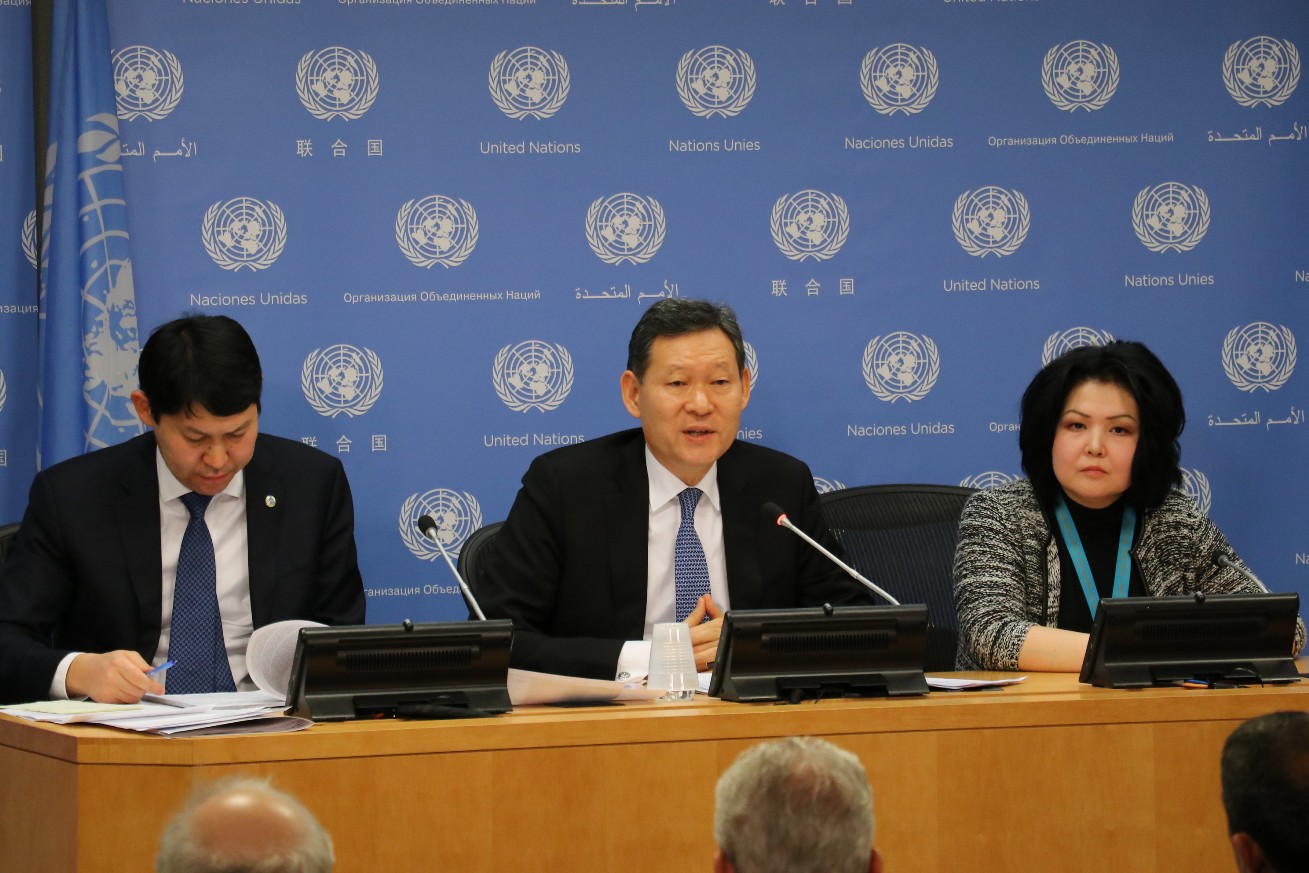 There was universal praise for the recent visit of the UN Security Council members to Afghanistan where everyone had the chance to assess the situation and make their own observations. This would go a long way in accelerating the peace process in the war torn country.

In the context of Kazakhstan’s contribution toward shaping a peaceful and prosperous world, it is central to mention some of the activities taking place at the UN Security Council this month.

One of the first initiatives of Kazakhstan as the chair of UNSC was the official flag-setting ceremony for countries elected last year by non-permanent members of the Council – Côte d’Ivoire, Kuwait, the Netherlands, Peru, Poland and Equatorial Guinea. Representatives of many delegations called this event “a bright business card.” It is assumed that such ceremonies will become a new tradition of the organization. This proposal is now under consideration.

The processes in motion include the nonproliferation of weapons of mass destruction, promotion of “green technologies”, solution of humanitarian problems in the zones of military conflicts and resolution of the conflicts themselves. The UN Security Council will have to analyze the situation around North Korea, Iran, Myanmar, Palestine and Israel, (in particular, the status of Jerusalem) and many other countries. For example, in January, quarterly open debates on the “Situation in the Middle East, including the Palestinian Question”, as well as open and closed discussions on the problems of Syria, Libya, the Democratic Republic of the Congo, CAR, Darfur, West Africa and the Sahel, Southern Sudan , Mali, Somalia, Cyprus and Colombia. A number of resolutions and statements of the new Security Council chairman are expected to be adopted.

The proposed program was approved and supported by the permanent member countries of the UN Security Council. So, the Permanent Representative of Russia to the United Nations, Vasily Nebenzia, expressed confidence “in the success of the work of the Kazakh delegation in the capacity of Chairman of the Council.” US Ambassador Nicky Haley and other ambassadors of the Council member countries noted the rich and rich program of Kazakhstan, as well as the fact that it focuses on the most pressing world issues and contemporary challenges of the time.

In the near future, the world community is expecting animated discussions and dialogue on the problems accumulated over the years. Kazakhstan as the current chair is set for a multi-vector peacekeeping dialogue.

“We believe that today we need to pay more attention to building trust relations between different political leaders, between countries,” Kairat Umarov, the Permanent Representative of Kazakhstan to the United Nations, sums up. “Without this, we believe that it is impossible to solve any problems. And I think that this is what is lacking in the world right now. ”

Independently, it is noteworthy that President Nazarbayev is likely to visit Russia in the foreseeable future to discuss a vast array of regional and international issues with President Putin.

Kazakhstan is the first country in Central Asia to chair the UN Security Council and Nazarbayev is the first president from the region to make an official visit to the USA. It is a matter of satisfaction to note that he kept the interest of the whole region in mind in his dialogue and talks. /// nCa, 19 January 2018