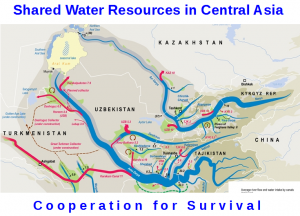 Karachi, 24 April 2017 –Recently Almaty hosted a meeting of the ecologists of five Central Asian countries. They discussed environmental problems that, as it turned out, were peculiar not only to Central Asia, but also to the most seemingly prosperous European powers.

According to WHO, deteriorating environment in Europe and Central Asia leads to the death of about 1.5 million people every year. People are dying from air pollution, as well as lack of access to clean potable water. In particular, due to water shortage, 14 people die every day. The main question that arises from all of this terrible data is: what should we do?

And this question concerns more precisely to the addressing of water problem, as the most pressing for the Central Asian nations. So, according to ecologists, the way to solve this problem is only one. — The five countries of Central Asia need to join efforts in addressing the most important and lasting issue of the entire region – fair and efficient distribution of water resources.

It’s not a secret that the disputes over the water resources in Central Asia have been going on for decades. The problem of the unequal distribution of water resources of region rich enough with water, concerns the upper countries of Kyrgyzstan and Tajikistan, and the lower riparian countries – Uzbekistan, Kazakhstan and Turkmenistan. They are the main consumers of such large transboundary rivers as Syrdarya and Amudarya, which in turn form the Aral Sea basin, once the fourth largest lake in the world.

These rivers originate in the mountains, supplied by glaciers, and therefore the main reservoirs, hydroelectric power stations and reservoirs are located on the territory of Kyrgyzstan and Tajikistan. That allows them to independently regulate the flow for the countries of the so-called lower reaches, or for the remaining three neighboring countries. In Soviet era, the countries acted on the principle of cooperation – upper countries reserved the water in winter for downstreaming it in summer for lower countries, and sustained electricity in winter, while others supplied the countries of upper reaches with energy resources. In the post-Soviet period, the system of mutual assistance was ceased, and the five nations started to solve the water issue in their own way, as a rule, unilaterally from others and infringing on each other’s rights.

For example, Uzbekistan, which lives largely off cotton industry and depends on the availability and adequacy of water, has already started building dozens of reservoirs in pursuit of being ready for possible water crisis in the region. Turkmenistan is building reservoirs and upgrading the irrigation infrastructure with eye on efficiency and environmental safety, which distinguishes it from the approach followed by Uzbekistan. Kazakhstan, even being dependent on the resources of the Syrdarya basin, like its neighbors, takes a stand-alone position. This country tries to restore and preserve the water arteries, which distinguishes Kazakhstan from the policy of other countries of the region.

However, as practice shows, disunity in such an important aspect of regional politics yields no results. At the same time, it is easy to understand the countries – each of the nations has its own national interests, and the entire Central Asian region is somehow woven from differences and contradictions, and therefore the conflict potential is quite serious. But, it is worth saying that there is some progress in solving the water issue. All five countries have been trying for many years to resolve the situation with benefits for all. Moreover, the region faces another, no less important, common problem – the threat of water shortage due to the rapid ablation of glaciers in the mountains of Central Asia.

Many international experts call it a future catastrophe, not only for the countries of the Central Asian region, but for the whole world. While mostly, people still shy away from this growing threat coming from the Tien-Shan mountains, analysts say that this issue matters for everyone, because it is already more global. And this problem can play a key role in the emergence of the water crisis in Central Asia. Moreover, in the medium term, an increase in the flow of water in rivers is predicted, but in the long term there would be reduction of full-flowing.

But this is still in the future and the countries of the region have not been duly worried about this. The situation will be aggravated by the construction of the Rogun and Kambarata hydroelectric power stations, the so-called “construction sites of the century”. The Kambarata hydro power plant should become the most powerful in Kyrgyzstan. It will also allow the export of Kyrgyz electricity. The project of the Rogun power plant is much more ambitious. Its capacity is designed at 3600 MW, however, neither the one nor the other party has funds to build this plant.

There is still no effective solution to the water issue in Central Asian region. At the same time, formally, water consumption is regulated by the Interstate Commission for Water Coordination of Central Asia, pursuing its activity since 1992. The Commission is quite active and successful, but its functioning is not enough.

The use of transboundary rivers is a regional problem and it is necessary to solve it by all five the Central Asian countries jointly, as much as possible with openness to each other. There is the need of solid allied instrument, a dialogue among the really strong partners and solid political will of the leaders of countries. There is the need of clear understanding that many environmental problems existing in the region can be solved only with the cooperation of the Central Asian countries. Moreover, they can be solved much more efficiently than alone, and with much lower costs. The countries can jointly address such neglected problems as the ecological catastrophe of the Aral Sea basin, which all Central Asian republics have pledged to save and restore.

The International Fund for Saving the Aral Sea, created by the Central Asian countries in 1993, plays a special role in overcoming the consequences of the Aral Sea crisis. It works with the active participation and support of various UN programs, OSCE, UNESCO, world banking institutions, as well as donor governments. In 2017, the three-year chairmanship in IFAS was transferred to Turkmenistan. Turkmenistan at the level of foreign ministry has stressed the need for the countries of the region to elaborate a unified strategy on the conservation and use of water resources.

Obviously, the regional stakeholders have a full understanding of the need to make partnership decisions in this sensitive issue. There is only one thing left – to reach a common consensus and to develop a package of coordinated measures that will change the general atmosphere of rivalry and discretion in the region, and in general, would strengthen the positions of Central Asian countries in the global context.