You are here: Home / Articles And Reports / Futuristic UPS complex for Ashgabat commissioned

Ashgabat, 19 October 2016 (nCa) — A futuristic, intricate network of powerhouses, substations and distribution network that will ensure uninterrupted power supply to the whole of Ashgabat was put into service Tuesday in a ceremony led by President Berdymuhamedov.

The heart of the entire system is a central control station – formally named Paýtagt control station of the state organization Aşgabatenergo – located in Prahat-6 (Mir-6) area of Ashgabat was where the ceremony took place. Speaking at the occasion, the Turkmen president said that the power supply network for Ashgabat will have very light environmental footprint because of the latest technologies and equipment for putting together the system. He underlined that the ecological concerns were the decisive factor in all the development initiatives of Turkmenistan.

Berdymuhamedov said that Turkmenistan is currently exporting electricity to Afghanistan and Iran. In future, he said, power supply cables would be laid along the route of TAPI (Turkmenistan-Afghanistan-Pakistan-India gas pipeline) to enable the export of electricity to the South Asian markets. The other speakers at the ceremony were Ricardo Cordoba, the vice president of General Electric for Europe, Russia, CIS and Turkey, Ahmet Chalyk, the head of the Turkish conglomerate Chalyk Holding. The project was done by Chalyk Energy, with technology, equipment and professional support from General Electric.

The project got some certification from international organizations. Prof. Dr. Annie Sasco of the University of Bordeaux (France) presented the certificate of the Green Print organization of ecological safety. This certificate confirms the ecological integrity of the project. Associate Professor Attila Dincer, who is the senior advisor to the ministry of economy of Liechtenstein, and Professor Leopold Kayblinger of the Austrian energy institute and chairman of the European fund for international affairs presented certificates related to energy efficiency and power supply reliability of the project. The project consists of dozens of transformer substations including 5 units of 220 kV, 22 units of 110 kV, and 29 units of 35 kV. There are 140 transformers and distribution substations of 10 kV.

Connecting these substations is nearly 900 km of underground network of cables.

The Ashgabat DES, Dagly, Nowruz and Olimp substations were opened Tuesday with President Berdymuhamedov giving permission by video link to each station to patch to the grid. 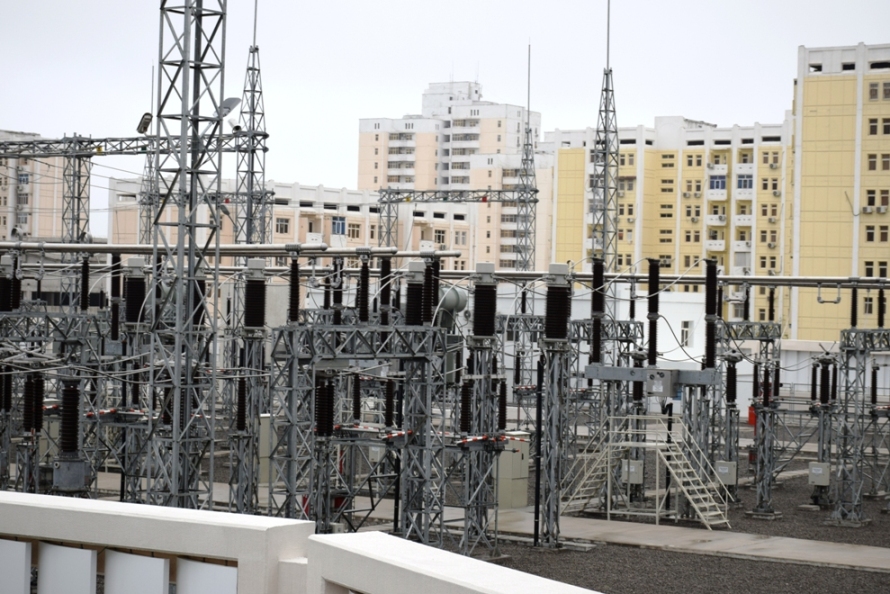 The centrally controlled network will ensure stable and uninterrupted power supply to the capital.

The General Electric teaching facility has satellite links for monitoring the projects being done jointly by Chalyk Holding and General Electric and also for providing distance learning opportunities to the students to benefit from top professors in the USA and Europe.

Uninterrupted and reliable power supply to Ashgabat is obviously the main feature of the project opened Tuesday. However, there is lot more to this.

The Paytagt control station is linked by fiber optic connection to the central control station at the ministry of energy. It means that the energy system of the whole country can be monitored and controlled in a unified manner.

This will have numerous benefits:

The centralized control will also bring peace of mind to the countries that import electricity from Turkmenistan because they will be assured of uninterrupted and stable supplies.