You are here: Home / Articles And Reports / Aikido – The gentlemanly art of self defence

Ashgabat, 19 September 2016 (nCa) — Aikido is the gentlemanly art of self defence without causing injury to the attacker. Based on the techniques of jujitsu (Daitō-ryū Aiki-jūjutsu) and other Japanese martial arts, Aikido is a wonderful blend of fitness, spirituality and harmony.

The embassy of Japan in Turkmenistan, in collaboration with the sports and martial arts club Lachyn Ay, organized Sunday a demonstration of Aikido by Aikido Master Yuji Horikoshi.

Horikoshi, who has conducted master classes in some 30 countries, showed the techniques to disarm and subdue the attackers in various scenarios. 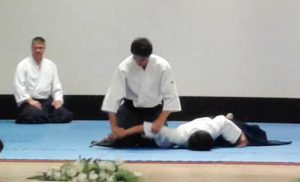 Aikido (合気道) was developed by Morihei Ueshiba in the first half of 20th century. Ueshiba, also known as O Sensei (The Great Teacher) developed Aikido as a way of unifying with life energy i.e. the way of the harmony of the spirit.

Today different versions of Aikido are practiced by different countries and different schools but peace and harmony are at the core of all of them. None of the styles are superior or inferior to any other but the students can make their own choice depending on what suits them.Actually, the skill for self defence should be considered a by-product of the Japanese martial arts including Aikido. The main stress is on enriching the life, and pursuit of harmony and peace. 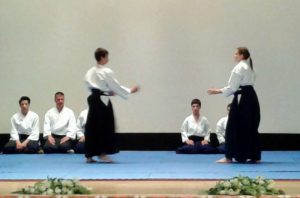 A short story will illustrate this point:

A young boy traveled across Japan to the school of a famous martial artist. When he arrived at the dojo he was given an audience by the Sensei

“What do you wish from me?” the master asked.

“I wish to be your student and become the finest kareteka in the land,” the boy replied. “How long must I study?”

“Ten years is a long time,” said the boy. “What if I studied twice as hard as all your other students?”

“Twenty years! What if I practice day and night with all my effort?”

“Thirty years,” was the master’s reply.

“How is it that each time I say I will work harder, you tell me that it will take longer?” the boy asked.

“The answer is clear. When one eye is fixed upon your destination, there is only one eye left with which to find the Way.” /// nCa