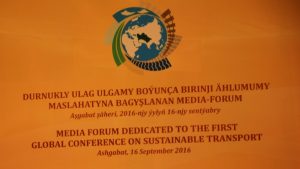 With participation of more than 100 media houses and international organizations, the forum was the first event of its kind to spotlight the role of transport and how it connects with everything else we do to make this world a better place.

The media forum was really the drumbeat for the First Global Conference on Sustainable Transport that Turkmenistan will host in November this year under the auspices of the United Nations.

It format was traditional yet daring, compact but deep in scope, informal and still highly engaging. It was a successful experiment in so many different ways: 1. Creating the media consensus that transport is central to modern life; 2. Building the bridges between the media and the international and regional organizations that play key role in the transport sector; 3. Triggering dialogue within the media community about the magnitude of transport in our lives; 4. Generating understanding among the international and regional organizations that there are still unexplored ways in which they can work together in the transport sector; 5. The very crucial role Turkmenistan is playing in creating the connectivity infrastructure for making transport the regional locomotive for sustainability;  and 6. The only way to deal with today’s challenges is for the media and the society to be on the same page. 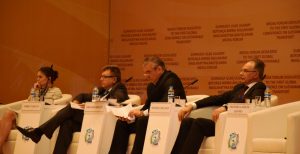 Every speaker, in drawing from their own experience and their own aspect of transport-related work, underlined that the world would literally come to a grinding halt without transport.

Every speaker also returned to the fact that the UN General Assembly resolution of December 2014 that recognizes the role of transport and transit corridors in ensuring the international cooperation for sustainable development and the resolution of December 2015 that reiterates the important of creation of the transport and transit corridors were initiated by Turkmenistan and unanimously endorsed by the entire world community.

Turkmenistan was rightly described by many speakers at the forum as one of the founders of transport diplomacy.

There was accord among the speakers that the world community is fully supportive of the initiatives of Turkmenistan aimed at creating a multi-modal, integrated, sustainable transport system. 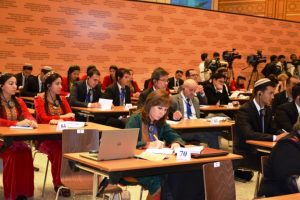 The speakers from Turkmenistan stressed the need for joint work on developing the North-South and East-West corridors, with equal attention to rail, road, river, sea and air routes.

An important conclusion was that the need for reliability of supply of goods and services creates the preconditions for the development of a universal mechanism for sustainable transport.

In sustainable transport system, the development of transport infrastructure will contribute to the expansion of export capacity, improving the well-being of the population, development of the tourism industry and increasing of free currency inflows.

The speakers also touched upon the impact of road transport on the environment and transport safety. In particular, as noted in speech of head of ESCAP subregional officefor North and Central Asia Tiziana Bonapace, annually 1.2 million people die at traffic accidents and another 40 million get injured. About 80% of fuel consumption and 70% of emissions come from the road transport.

In particular, with respect to financial aspect, ESCAP proposes that huge investments to the development of sustainable transport can be attracted through public-private partnerships.

As noted in the report of IRU representative, UN Global Conference on Sustainable Transport to be held in November this year in Ashgabat is expected to be attended by UN Secretary-General, transport ministers, heads of international transport organizations.

In the framework of the November conference, transport business forum will be held. The agenda of forum includes the key issues of the Global Partnership Program for Sustainable Transport (GPST). The overall objective of GPST is providing an international platform and conditions for multilateral dialogue on policy options and possible actions for the development of sustainable transport systems.

Separate presentation slide was devoted to the global transportation business summit, which will be hosted by Ashgabat on 27 November 2016 as part of the summit will be held:

– Session 1. The contribution of transport business to realization of SDG;

– Session 3. Transit and opportunities for the development of global supply chains;

– Session 4.The role of public-private partnership and innovative financing mechanisms;

– Session 6. The future of sustainable transport.

As noted in report of the Executive Secretary of OSJD (Organization for Cooperation of Railways), this organization was founded in 1956 and today consists of 28 countries, represented by the ministers of transport and railway operators.

– Corridor No 6 with length of 10,054 km passes via territory of the Czech Republic, Slovakia, Hungary, Romania, Serbia, Bulgaria, Greece, Turkey, Iran and Turkmenistan.

During the second session of the media forum, in his speech Deputy Secretary General of SCO Wang Kywen said that his organization attaches great importance to the development of transport infrastructure in the region, logistics and communications, creation of extensive system of transport routes in SCO space.

According to Wang Kywen, to date, the SCO is actively working on the harmonization of the Chinese initiative of New Silk Road into national strategies of member-countries for transport development.

Some statistics on the transport sector of Turkmenistan were presented by Professor of the department of banking of Turkmen State Institute of Economics and Management Bayramdurdy Tayharov.

In 2015, 494 million tons of cargo and 983.9 million passengers were transported via Turkmenistan.