You are here: Home / Articles And Reports / TAPI opts for self propulsion – Turkmenistan to lead consortium

Ashgabat, 7 August 2015 (nCa) — In a historic choice Thursday, Turkmenistan decided to act as the consortium leader for TAPI, the pipeline project that will transport Turkmen gas to Pakistan and India through the territory of Afghanistan.

During the 22nd meeting of the steering committee of TAPI, a ministerial level body empowered to take executive decisions, Turkmenistan offered to lead the consortium that will build and operate the pipeline. The oil and gas ministers of the participating countries of TAPI – Afghanistan, Pakistan and India – agreed unanimously. The representatives of ADB (Asian Development Bank), which is serving as transactional advisor for the project, were also present at the meeting held in Ashgabat. 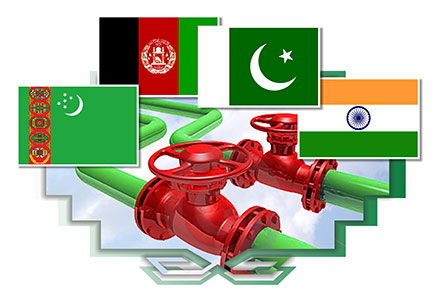 As consortium leader, the state concern Turkmengaz will lead the construction, financing, ownership and operation aspects of TAPI.

All the TAPI participants will make investments according to the techno-commercial viability, shareholders agreement and investment agreement, to be hammered out later.

The implementation phase of TAPI is expected to start in December 2015 in the presence of the heads of state of Turkmenistan, Afghanistan, Pakistan and India.

It is a bold but well calculated decision by Turkmenistan to lead the TAPI consortium. With the rapidly expanding economy that is slated to remain strong for the foreseeable future, Turkmenistan is ready to open its wings.

Pipeline construction and management is the logical area for Turkmenistan to start with the foreign partnership at this massive scale.

Turkmengaz, the state concern that will lead the TAPI consortium, is in the final stage of building the East-West pipeline, the cross country conduit that will connect all the major gas fields of Turkmenistan into a single network. With annual capacity of 30 billion cubic meters, and length of 900 km, this pipeline is equivalent to half of TAPI and Turkmenistan has done it entirely on its own.

In the pipeline business, digging the trench to bury the pipe is no big deal. The expertise comes into play when installing and commissioning the compressor stations and boosters, the metering stations and monitoring systems. Turkmengaz can do all of this with proven track record of the last 50 years.

As a strong proponent of partnership on the basis of equality and mutual respect, Turkmenistan tried for years to offer the TAPI consortium leader position to some foreign company. Several companies were interested but every initiative was cut short because of the behavioral dysfunction of some American multinationals. Conspicuously, Chevron and ExxonMobil insisted on getting PSA rights to Galkynysh gas field of Turkmenistan as a precondition to lead the consortium. Moreover, the attitude of some of the Chevron and ExxonMobil executives was utterly obnoxious and rude during their inglorious stay in Turkmenistan.

In addition to insisting to breach the hydrocarbon laws of Turkmenistan, Chevron and ExxonMobil worked actively to discourage any other foreign multinationals from negotiating the TAPI leadership position. In the end, in the best tradition of the foot soldiers of a dying empire, they managed to shoot down their own prospects, not just in Turkmenistan but in the region at large.

TAPI is perfectly doable under the formula that emerged Thursday. The TAPI partners can pool together the finances and expertise for this enterprise.

In addition, negotiations are in hand for the participation of Russia and China, which will make the political and technical aspects of TAPI easy to deal with. Moreover, as President Berdymuhamedov said in Istanbul on Thursday, some Japanese and Korean companies are also expected to join in the TAPI work.

It seems that TAPI has unintentionally served as a filter to separate friends from foes.

It is logical to expect that after the ignominious defeat of the American designs, ISIS will miraculously appear in Afghanistan, just along the TAPI route. It will be problematic but there are ways to handle it. After all, nothing is forever.

Afghanistan, Pakistan and India will need to show honesty of purpose to make it a success. By working at cross-purposes, they will not only defeat TAPI but lose whatever goodwill they have in Central Asia. At stake is not just this project but their long term partnership with the region and beyond.